FOXBOROUGH, Mass. -- When New England Patriots safety Patrick Chung first met Jack Berry at training camp last summer, he promised him that he'd wear the "Jack Strong" bracelet he'd been handed after practice.
Ten months later, the fit is better than ever.
"I still have my band on. I'm not going to take it off. Everyone sees it, and it's just a part of me," Chung said. 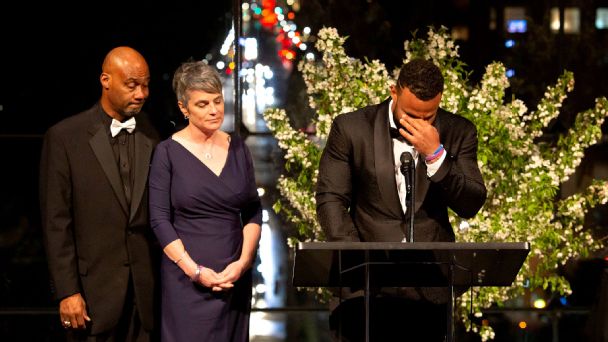 • Year of grief and grace for 49ers' Thomas
• Inside Bengals' fun, absurd fine system
• Giants QB Jones sounding, acting like Eli
• Rams glad to have Donald back for offseason
• Wentz, Jackson starting to find groove
Here's an even better update: After a challenging 10 months in Boston that ended with him receiving a prosthetic right leg in a rare rotationplasty surgery, Jack finished cancer treatment in April and has returned home to Missoula, Montana.
"When we first got back [April 20], it kind of felt like we had never really been gone. Everything seemed kind of the same," the 11-year-old said in a phone interview. "All of my friends are still wearing their 'Jack Strong' bracelets and everyone is really supportive."
How the 31-year-old Chung became a friend to Jack and parents Cooper and Kate was unexpected. They met randomly after a practice, and when Jack handed Chung one of his bracelets, Chung asked him to sign it. Jack's positive outlook after being diagnosed last summer with osteosarcoma, a solid tumor of the bone, resonated with Chung, and the connection between them blossomed from there.
This is an important part of the story to Chung, who was reluctant to grant an interview because he didn't want to draw attention to himself. But as long as the spotlight shined on Jack ...
"He's a bright spot for me," Chung said. "I tell his family all the time, there are a lot of kids that go through things a lot smaller than that, and they're complaining and sad. But when I see Jack, I've only seen him smile. I don't see any frowns on him. He accepted what he was going through and got his leg."
"He's a good kid who has gone through a lot, and he's strong about it, he's happy and smiling. I think that's very inspiring. People can learn a lot from that, from grown-ups on down."
Jack is still waiting to get clearance to start running on his new leg, but that hasn't stopped him from making familiar climbs up Mount Sentinel, which is right outside his door. Jack is also going through physical therapy and said of his new leg: "At first, it was a little weird, but now it kind of feels like my new normal."
Returning to Montana has been uplifting for the family.
"It feels like a bit of a time warp. It's like nothing ever changed, but at the same time, everything has changed," Cooper said. "It's so wonderful to be home in normal routines. Jack went back to school, which was unexpected, and he's academically doing amazing. He had missed most of the year. It feels wonderful to be home and back in our community. We certainly miss the people who were with us throughout that battle, of course, but this is our home and we couldn't be happier."
Added Kate: "It's been so nice for us to come home and just to be able to think about the last 10 months and all that we've been through as a family, and kind of reflect on that time. We feel so fortunate that Jack was able to be at the Jimmy Fund Clinic and have exposure to all that Boston has to offer. And now to be able to come home to our community here that was so supportive to us the whole time, it's very comforting to be back and to be on the other side of this."
There were times when that seemed so far away for the Berrys, such as during Super Bowl LIII, when Jack was in the intensive care unit with a severe bacterial infection. They watched the Patriots beat the Los Angeles Rams, a game in which Chung broke his arm. When television cameras showed Chung on the field, the "Jack Strong" bracelet was visible to many.
"I can't tell you how many texts we got from people who saw that," Cooper said. "Patrick obviously has a much bigger platform, and it was so special for him to shine his light back on us and pick us up throughout that grind we went through. You're in this very challenging, personal moment, and to have people just saying, 'We just saw that and we're with you' -- that carries you through."
Added Kate: "Patrick represented so many people who were doing that same thing for us. He symbolized this huge force that was behind Jack, and that was really powerful for us. It's been so great how it seems like he's more a friend than a super athlete that has come into our life. It seemed like he did it because he felt a connection to Jack. It was a real connection, and I think that was what was so nice about it."
It's a connection that is now a long-distance one, which is the way everyone wants it.
"I know he loves it," Chung said. "Now he's back to just playing, with his friends, and that's awesome."
Said Kate: "Jack's focus now is riding his bike to and from school, and doing that kind of stuff, rather than driving back and forth from the Jimmy Fund Clinic. It's a good place to be."